Just wanted to give you a quick update on my project where we resurrected a long lost opera and made a funny documentary film about the adventure.

In the last two months we screened the film in five festivals from coast to coast (that’s a lot of Fs!). Here’s some photos from our recent adventures:

Along the way the film won three new awards:

By the way, I’m doing a project where I take a photo every day this year and post it to my Instagram if you have any interest in following along.

One of the most meaningful experiences I had on the road with the film was when an audience member approached me after a screening and told me “You know, I really wasn’t sure about this whole opera music thing when my friend dragged me to this screening…”

I laughed and assured her that I completely understood where she was coming from and that I was pretty skeptical of “the whole opera music thing” when I started this project way back in 2013. She replied “But you know what? When I saw the end of the film when they were performing it, I was really getting into it!” We took a goofy selfie on her phone and said goodbye.

My fellow documentary filmmaker Tristan Hanson and I also did 2 more screenings of our other new documentary Blueprint for Bronzeville about affordable homeownership in a historic African American neighborhood. We ended up winning the Best Feature Award at The Collected Voices Film Festival! 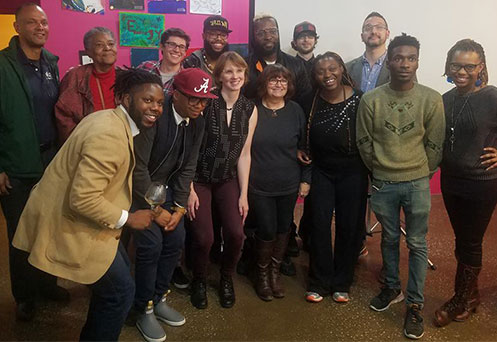 The activist group we filmed in the movie is also starting to use the documentary as an organizing tool at church screenings in their community which is very exciting. I think this particular film has a great destiny in academia too so we’re starting to talk with professors about using the film in their classrooms.

Signing off until next time,
Arlen

P.S. – If you have other ideas about where to screen either film, just contact me and we’ll make it happen. We’ve already gotten some good referrals and connections from this PS that I include at the bottom of every update.